KIGOMA, United Republic of Tanzania – Women are giving birth on ferries, in temporary shelters and en route to Tanzania’s Nyarugusu refugee camp, say relief workers responding to the Burundi crisis, which has sent tens of thousands of people fleeing across the country’s borders. Health staff and life-saving reproductive health supplies are urgently needed, as are protections for women and girls.

The numbers have fluctuated, but as of 25 May, the United Nations Refugee Agency (UNHCR) estimated more than 46,000 refugees were seeking shelter in Tanzania, following violence and unrest in Burundi’s capital, Bujumbura. 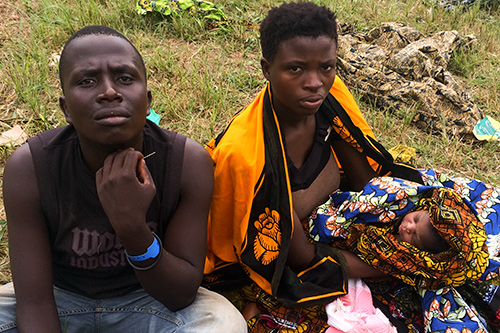 Chantal Hatungimana, 20, gave birth on a ferry carrying hundreds of refugee women and girls. She and her infant have not received any immunizations, Ms. Hatungimana and her husband said. © UNFPA Tanzania/Sawiche Wamunza

Estimates from 18 May indicated more than 26,000 refugees had fled to Rwanda, and more than 9,000 had sought refuge in the Democratic Republic of the Congo. Women in Burundi affected by the turmoil are also in need of immediate assistance.

Giving birth on a crowded ferry

A nurse-midwife helped deliver the baby just before they arrived at the port in Kigoma. Neither mother nor baby received any vaccinations after the delivery, Ms. Hatungimana and her husband told UNFPA, adding that they hoped they would find more medical care when they made it to their destination, Nyarugusu Camp.

Roughly 1,600 refugees arrive in Kigoma each day, coming on the MV Liemba or the MV Malagarasi, a cargo ship. Health workers in both Kagunga and Kigoma have been overwhelmed by cases of acute diarrhea and cholera. Pregnant women and new mothers are in urgent need of reproductive health care, including antenatal care, safe delivery services and post-partum care.

“The conditions in Kagunga Village for pregnant women are not good," said UNFPA’s Assistant Representative in Tanzania Rutasha Dadi. “There are no delivery beds, no antenatal clinics, and the two nurse-midwives present are overwhelmed because they also take care of other refugees who have acute diarrhoea.” 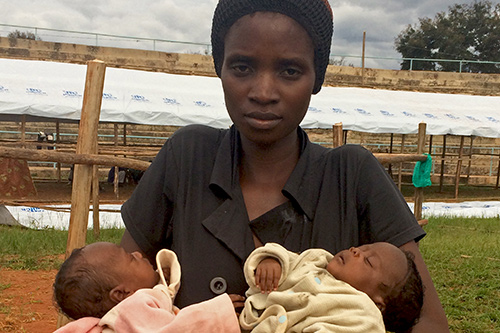 Nyiomngere, 24, gave birth to twins three weeks ago at a temporary shelter. Diagnosed as severely anaemic, she is now caring for four children, while her husban remains behind at a transit point. © UNFPA Tanzania/Sawiche Wamunza

Nyiomngere, 24, gave birth to twins three weeks ago in Kagunga Village. She has been diagnosed as severely anaemic, and transport problems have separated her from family members.

Nyiomngere was recently transferred to Kigoma, where Lake Tanganyika Stadium is serving as a temporary shelter. There, she is caring for her two newborns as well as her other children, ages 5 and 2, but her husband remains behind in Kagunga.

Nibitanga Suzana, 27, has had a similar experience. She and her daughter have just arrived in Kigoma. Her other children are with her husband at a shelter in Kagunga. Ms. Susana is eight and a half months pregnant, and has been unable to receive prenatal care at either Kagunga or Kigoma.

“The pregnant women sleep outside on Lake Tanganyika’s shores,” said Dr. Dadi, noting that they are dangerously vulnerable to a malaria outbreak.

The crisis has also left women and girls at increased risk of gender-based violence. Hundreds of assaults have taken place, often en route from Burundi to Kagunga, according to reports gathered by staff at Nyarugusu Camp. 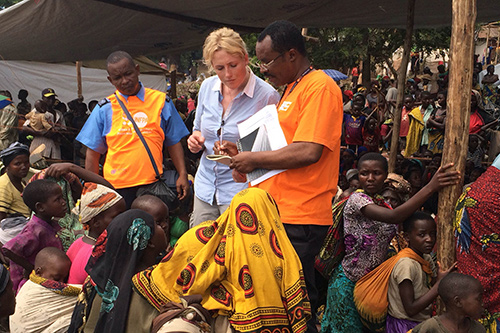 Multiple abuses have also been reported in Burundi.

When riots broke out at a university in Bujumbura, 20-year-old domestic helper was instructed to watch over her employer’s house while his family fled to Rwanda. Her employer’s brother also stayed behind, and one night he returned to the house and raped her.

The following morning, neighbours helped the woman receive assistance at the Seruka Centre, a UNFPA-supported centre for survivors of gender-based violence. She received medical care and psychosocial support, and is now receiving legal assistance.

In response to the crisis, UNFPA is delivering thousands of dignity kits – containing essential hygiene supplies such as sanitary napkins and soap – to affected women and girls of childbearing age. Reproductive health kits are also being provided to health workers in the camps and transit areas; these kits contain the drugs, supplies and equipment required to support safe childbirth, even in emergency situations.

“UNFPA has so far supplied delivery kits, and will also support a temporary health post to screen, identify and assist pregnant women,” said Dr. Dadi, referring to a collaboration with UNHCR and the Tanzanian Red Cross in Kagunga Village. “Two delivery beds and four nurse-midwives have been deployed to respond to the situation.” 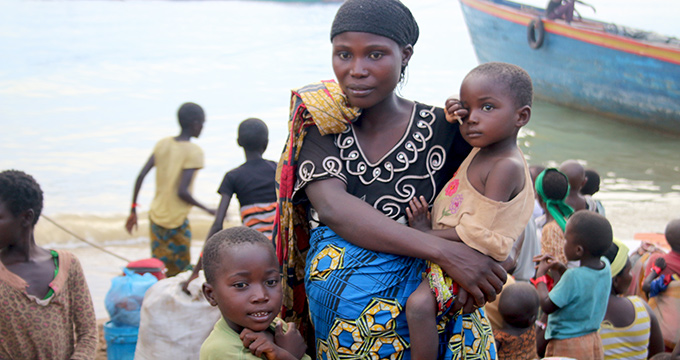