TAL REFAAT, Syria – A surge in violence in Syria’s northern Afrin region has triggered a mass displacement of the civilian population, with an estimated 98,000 people fleeing as the hostilities approached Afrin City. The humanitarian situation is extremely precarious, with major unmet protection and medical needs, UNFPA found during its assessment mission on 17 March.

“The people are scattered at multiple locations. In Tal Refaat for example, they shut down 16 schools where teaching was taking place to accommodate displaced people,” said Massimo Diana, UNFPA’s representative in Syria. “In addition, a lot of people have moved into houses, warehouses, garages, mosques.” 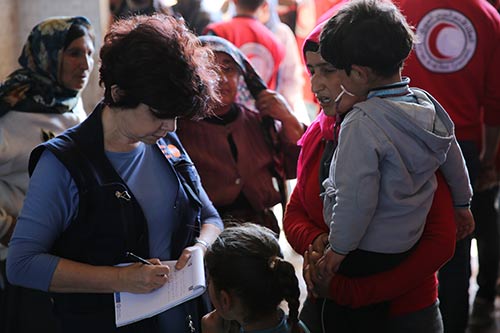 An estimated 75,000 people poured into Tal Refaat over the past week, many walking for 36 hours to reach safety and shelter. Tens of thousands more have fled to the nearby areas of Nubbol and El Zahraa villages, and communities are bracing for additional arrivals in the coming days. It is estimated that the numbers of displaced in Tal Refaat could go up to 100,000.

Many of the arrivals have serious reproductive health needs. “We met a lot of people who were pregnant,” said Ameera Ahmad, a UNFPA gender officer who visited Tal Refaat and the surrounding areas.

Many people lost access to medical care even before they were forced to flee. “Before they left Afrin, there was no electricity, no hospitals, no doctors – the doctors escaped also – so no one could serve them,” Ms. Ahmad said. 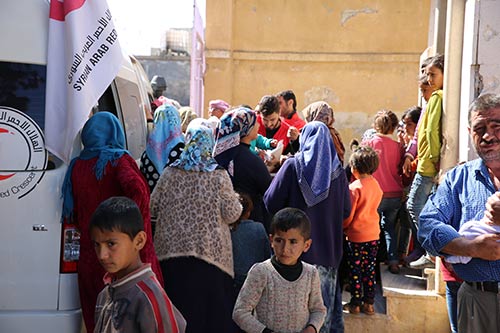 People queue for medical care at a mobile clinic operated by the Syrian Arab Red Crescent, with support from UNFPA. © UNFPA Syria/Sufian Abdulmouty

Displacement has only exacerbated their hardship.

Ms. Ahmad interviewed one woman who gave birth without any assistance during the trek to Tal Refaat. “She said ‘I delivered on my own without any help, there was no doctor, no midwife, no one.’”

Other women fared even worse.

UNFPA youth officer Nada Naja spoke with a dentist who fled Afrin. “She saw lots of women who were pregnant and had miscarriages on the road. She was so overwhelmed that she couldn’t talk anymore, and she started to cry. She told me, ‘I cannot explain to you what I saw.’”

But even pregnant women who safely arrive in Tal Refaat are facing limited medical services.

There is only one health facility in the city, staffed by three doctors and a midwife. It is overwhelmed with patients and facing shortages of drugs and medical supplies. The nearest hospital is a privately run facility in Zahra, where treatments are costly.

UNFPA’s rapid assessment found an increase in home deliveries due to the lack of accessible and affordable services. 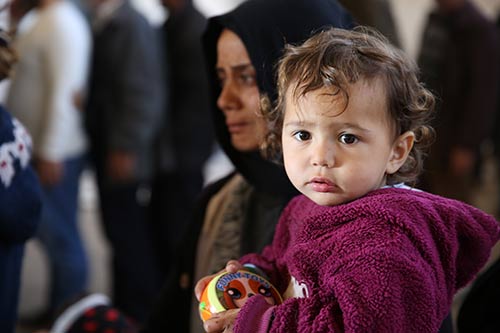 A displaced woman and her daugher wait for care at a UNFPA-supported mobile clinic. © UNFPA Syria/Sufian Abdulmouty

And in at least one case, desperation has pushed people to perform surgeries in non-medical settings. “In one of the schools, a woman told us that a classroom was being emptied and cleaned because an operation was going to take place in this room,” Ms. Naja recounted.

The UNFPA-supported mobile clinics have reached hundreds since the start of the mission. On 17 March, over 100 children and 60 women were served. On 19 March, the clinics reached 112 women, of whom 49 were pregnant.

These clinics will continue to provide services until a longer-term solution is found.

The stresses of the conflict have pushed some to the breaking point. Huda Kaakeh, a UNFPA programme analyst, met one man who “expressed that if he had a gun, he would commit suicide right away.” 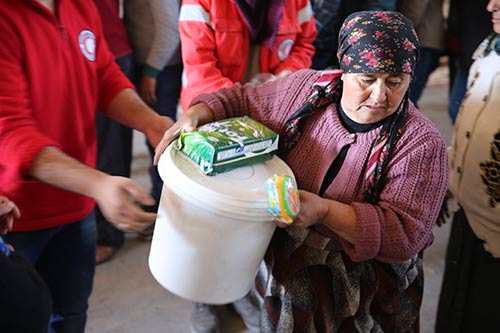 Shelters are overcrowded and lack suitable latrines, washing facilities and sufficient lighting. Many families are restricting the movement of women and girls out of fear for their safety.

“I met a lady close to Tal Refaat. She asked for solar lights because there is no electricity in the shelter. She cannot move in the dark or at night, so she asked for lights to go to the bathroom,” Ms. Kaakeh said.

UNFPA’s winter protection kits contain warm winter clothes and blankets, as well as whistles and flashlights to help women and girls navigate in the dark. But additional measures are needed to ensure safe access to toilets, public spaces and vital services.

Thousands more dignity kits and protection kits will be distributed in the coming weeks.

UNFPA is appealing for $9 million, both for its emergency response to the crisis in the Afrin region and also for its humanitarian response to the exodus of civilians from East Ghouta, where an estimated 100,000 people have been displaced by the escalating conflict. 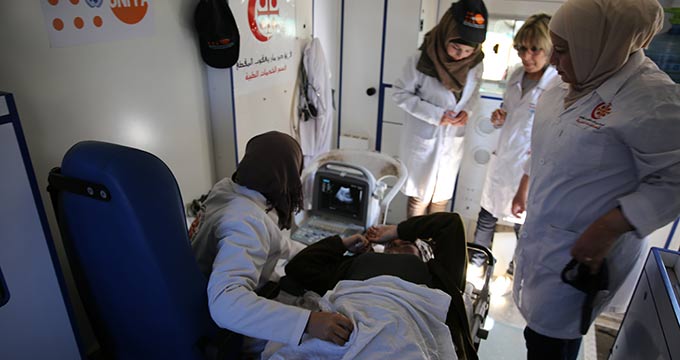