DAMASCUS, Syria – Ruqayya was pregnant when she fled the embattled city of Deir ez-Zor, in north-eastern Syria, with her husband and two young children. The family took refuge in Al-Areesheh camp, in Al-Hasakah Governorate – but Ruqayya’s ordeal was not yet over. Two weeks ago, when she went into labour, it became clear something was very wrong. “I thought I might die before the baby came into the world,” Ruqayya told UNFPA. “I escaped death in my town but thought that death had caught me during labour.”

“She was in labour and needed an urgent C-section operation,” explained Maan Al-Hosen, a coordinator with UNFPA.

But in the newly established Al-Areesheh camp – which hosts some 3,500 to 4,000 displaced people – there are no brick-and-mortal health facilities. 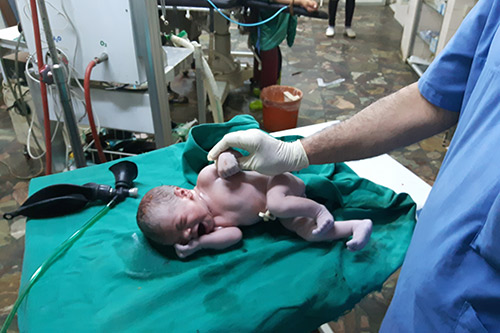 Ruqayya's daughter was born by emergency Caesarean section in a health facility outside the camp. © UNFPA Syria

“Unfortunately, there are no static health facilities inside the camp,” said Mr. Al-Hosen. Pregnant women do not have reliable access to antenatal care, and new mothers lack regular post-partum services and newborn care.

Many pregnant and breastfeeding women are not getting proper nourishment, experts say. Often, they even lack basic hygiene items.

An assessment, carried out on 10 July by UNFPA and partner UN agencies, found deteriorating humanitarian conditions in the camp, with environmental hazards including poor water and sanitation infrastructure.

Stepping up to offer relief

UNFPA and its partners have responded by stepping up services in the camp.

“UNFPA is the only organization working with WHO [the World Health Organization] to provide health services,” said Mr. Al-Hosen.

UNFPA and WHO are supporting two mobile teams, which are providing a variety of health services in the camp, including reproductive health care such as safe deliveries.

The mobile teams are also providing psychosocial services – essential for meeting the emotional and mental health needs of camp residents, who have endured enormous hardships and losses.

“The only way to understand the trauma and the needs of people is by talking to them,” said Massimo Diana, UNFPA’s Representative in Syria. 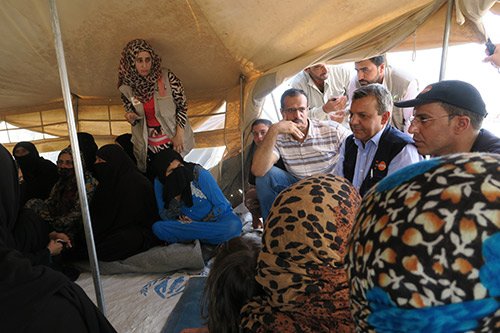 As of 18 June, the teams had reached some 1,700 camp residents. And in the last month, UNFPA has delivered some 500 dignity kits – which contain essential items such as soap, underwear and sanitary napkins – and over 700 health services.

These efforts are part of UNFPA’s broader response to the humanitarian needs in Syria. In Al-Hasakah Governorate, for example, UNFPA is working with nine Syrian organizations to provide relief services, including a total of seven mobile teams, seven health clinics and three women’s and girls’ safe spaces.

As for Ruqayya, she managed to escape death once again.

On 12 July, she was transferred to the nearest clinic, a facility operated by the Pan-Armenian Charity with support from UNFPA.

There, she safely delivered a baby girl.

Afterward, UNFPA staff visited her at the facility. She and the baby were both recovering well.

Like all mothers, she has hopes and fears about her baby’s future. To set her on a good path, she gave the baby a name with a special meaning.

“Her name is Hala,” Ruqayya explained, delicately transferring the newborn from one arm to the other, “after the psychologist who helped me when I thought I was all alone.” 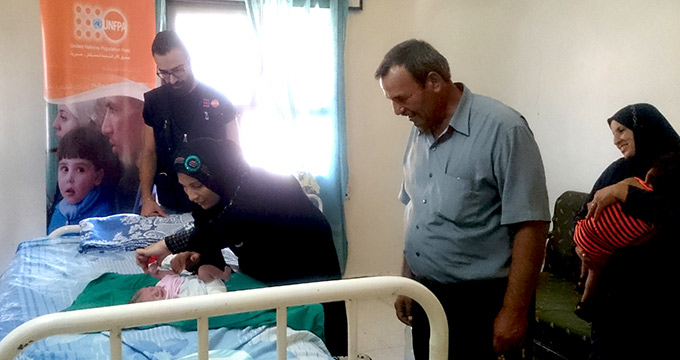