PUERTO PRINCESA, Philippines – “I want to be a doctor someday,” said Shaina Macmac, 16, a senior at the WPU-Agricultural Science High School in Palawan, a southwestern province of the Philippines. “Aspirations in life drive young girls like me to push forward even though we face challenges every day.”

And there are challenges.

The Philippines is the only country in Southeast Asia where teenage pregnancy are not falling, according to a 2015 UNFPA study.

There are 10 million girls aged 10-19 years old in the country, and, like Shaina, they have hopes and dreams. But by age 19, 1 in 5 girls will be a mother, according to the country’s 2013 demographic and health survey.

“I have seen in my community when a girl becomes pregnant, her life changes dramatically,” said Shaina. “Some stop pursuing their education and their job opportunities diminish. She becomes more vulnerable to poverty and her health often suffers,” she added. 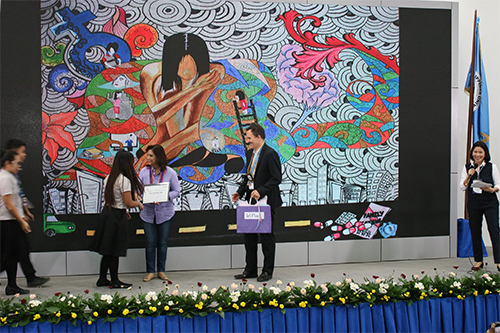 Vice President Leni Robredo and UNFPA Country Representative Klaus Beck took part in a dialogue with young people at the launch of the campaign. © UNFPA Philippines

Adolescent pregnancy is generally not the result of a deliberate choice; it is a consequence of little or no access to school, information, or sexual and reproductive health care. This is especially true for poor and marginalized girls who often have little say over decisions affecting their lives.

To take on this issue, UNFPA and the Office of the Vice President have started the Babaenihan Campaign, a call to action for the public and private sectors, as well as civil society partners, to invest in education, health and economic opportunities for adolescent girls.

Babaenihan – which combines the Tagalog words for “women” and “community spirit” – will conduct talks at both the national and community level, and will engage with local governments.

The community-based talks, to be held throughout the Philippines, will enable marginalized girls to participate in, and shape the direction of, the campaign.

Girls will be able to ask questions and share their experiences, concerns and challenges. Cumulatively, the real-world needs of adolescent girls will be reflected in the campaign, and their challenges will be brought to the attention of local and national policymakers.

The campaign kicked off with an opportunity for young people to make their voices heard by leaders. 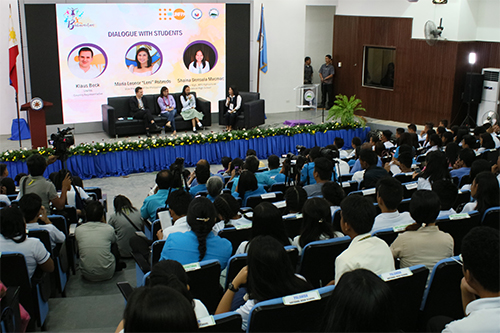 The campaign will give young people the chance to voice their opinions, explain their challenges and call for action. © UNFPA Philippines

At a launch event, held on 11 August 2017 at Western Philippines University, an open forum on teenage pregnancy was conducted with high school students. Vice President Leni Robredo and UNFPA Country Representative Klaus Beck both took part in the event, listening to the perspectives of young people.

“Too many young girls do not have access to correct information, advice and services to prevent pregnancy,” said Mr. Beck.

“We want to focus on 10- to 19-year-old girls,” Vice President Robredo explained. “We want them to maximize their potential, so we want to hear from them about the challenges they’re facing, particularly teenage pregnancy. We don’t want to create programmes where we dictate upon them. We want to create programmes with them, where they are the ones who tell us what they think is the assistance they need.”

Babaenihan is the first-ever campaign to address the prevention and response to teenage pregnancy conducted with the support of the highest female official in the country.

“It means a great deal to me and many other girls that our voices are heard and we’re empowered,” said Shaina, who spoke at the Babaenihan launch.