Despite strides the world has made towards gender equality, teenage girls remain extremely vulnerable. Too many girls continue to see their rights abridged and prospects diminished by discrimination, exploitation and poverty.

“In some parts of the world, a girl who reaches puberty is deemed by her family or community as ready for marriage, pregnancy and childbirth. She may be married off and forced to leave school,” said UNFPA Executive Director Dr. Babatunde Osotimehin. “She may suffer a debilitating condition, such as fistula, from delivering a child before her body is ready for it. She may be denied her human rights.”

Yet teenage girls have enormous potential. When their rights are fulfilled, they enrich the world in vast and immeasurable ways. When they are valued and supported, they are healthier and more likely to emerge from poverty. They contribute to their communities and economies. Their efforts, ideas and imaginations are unleashed.

These six graphics show why investing in teenage girls is absolutely critical – not only for girls, but for the world.

1. The last decade has seen more young people than at any other time in human history.

The last 10 years has seen a larger generation of young people, those aged 10 to 24, than ever before. Since 2010, young people in this age group have accounted for around 1.8 billion of the world's people, and this number is expected to cross 2 billion in the year 2050. By contrast, in 1950, there were only 721 million people in this age range.

These young people are the future. Their choices, ideas and innovations will transform the world – but only if they are equipped with the right skills and opportunities.

2. About nine out of ten of these young people live in less developed countries

A whopping 1.59 billion young people live in the developing world, where they are more likely to face poverty and lack access to health care and education.

Yet this is exactly where healthy, educated and empowered young people could make the most difference.

3. And half of these young people face alarming vulnerabilities – because they are girls.

Violence against women and girls is one of the world’s most prevalent human rights abuses. Half of all sexual assaults are committed against girls aged 15 or younger. Studies show that about 20 per cent of women experienced sexual violence as girls.

Too often, these crimes go unpunished. They may even be tacitly endorsed by sexist attitudes and practices like child marriage.

4. In developing countries, one in every three girls is married before reaching age 18.

A shocking one third of all girls in the developing world (excluding China) are married off while still children. This means the futures of 47,700 girls are derailed every day.

These girls often face a cascade of other human rights abuses. They are more vulnerable to physical and sexual violence. They are often pulled from school to take on domestic responsibilities. They are less able to advocate for themselves and their rights.

5. Child marriage is often followed by pregnancy, even if a girl is not yet physically or mentally ready.

Every day, over 20,000 girls under age 18 give birth in developing countries – over 7 million a year.

Adolescent pregnancy is usually not the result of a deliberate choice. Rather, it is the consequence of an absence of choices. Girls who become pregnant tend to be poorer and to have little or no access to sexual and reproductive health care and information.

And pregnancy compounds their vulnerability, taking an enormous toll on their educations and future earning potential. It also vastly increases the risks to their health. In fact, complications from pregnancy and childbirth are the second leading cause of death among girls between 15 and 19 years old.

6. But the solution to ending these human rights abuses is known: Empower girls.

When girls are valued as much as boys – when they are allowed to receive an education, when they live free of violence, and receive sexual and reproductive health information and care – they are able to stand up for themselves. Educated girls are more likely to delay marriage and pregnancy, and their future children are healthier. These girls are better able to meet their full potential, benefiting themselves, their families, their countries and the world.

We already see this happening. Since 1999, the number of countries with severe gender disparities in primary education has been cut by more than half. But girls continue to lag behind in secondary education: By 2012, out of all countries with data available, 63 per cent had yet to achieve gender parity in secondary school enrolment.

Much more must be done to protect teenage girls' rights, and to ensure they have access to the same opportunities as boys.

"Governments everywhere need to invest in teenage girls in ways that empower them to make important life decisions and equip them to one day earn a living, engage in the affairs of their communities and be on an equal footing with their male counterparts," said Dr. Osotimehin.

"A teenage girl whose rights are respected and who is able to realize her full potential is a girl who is more likely to contribute to the economic and social progress of her community and nation." 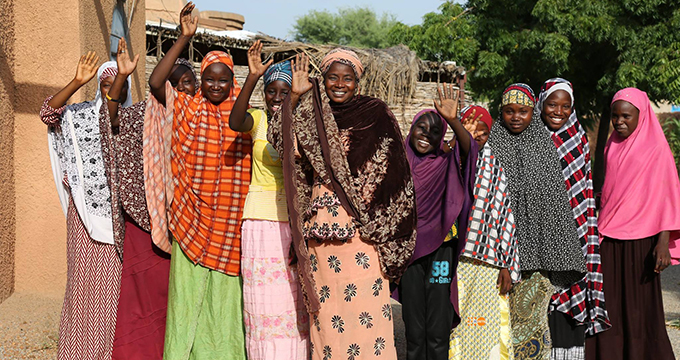